The RideKC East-West Transit Study area is from Rainbow Boulevard to the west and the Truman Sports Complex to the east, and 31st Street to the north and 43rd Street to the south.

This study is designed to provide a roadmap to help fill existing east-west transportation gaps, connecting into primary north-south transit corridors, as well as give communities in Wyandotte County and Eastern Jackson County the opportunity to leverage regional assets. Farris said developing plans and local consensus on regional project priorities is essential to this process. The general study area for this effort is located south of greater Downtown, bounded by Rainbow Boulevard on the west, 31st Street on the north, 43rd Street on the south, and the Truman Sports Complex (Kauffman Stadium and Arrowhead Stadium) on the east.

Farris said the proposed west terminus for the corridor is the University of Kansas Health System campus. The proposed terminus on the east is the Truman Sports Complex with a direct connection to the Rock Island Corridor. Consideration will be given to areas outside of the study area with regards to opportunities for longer-term investments or phases of the identified high-capacity transit corridor.

The discussion sparked feedback from Imagine committee members, who expressed the need for improved east-west connections along Downtown corridors such as  Independence Avenue, 12th Street, and 18th Street.

“Improving physical East-West Connections is critical to success and will have positive impacts on the resiliency, trajectory, and economic opportunities of neighborhoods surrounding the center of Downtown Kansas City,” states the Imagine Downtown KC Strategic Plan.

Farris welcomed the discussion. He said the East-West Transit Study began in April 2022 and will take approximately one year to complete. Jason Parson advised Imagine stakeholders to closely monitor progress on the KCATA study.

Farris closed his presentation by welcoming  more questions about the RideKC East-West Transit Study. Implementation Committee members are invited to contact him at ajfarris@kcata.org.

The next meeting of the Imagine Implementation Committee is set for 8:30-10:30 a.m. Thursday, Sept. 29 at the Downtown Council offices. For more information, contact Ann Holliday at ann@downtownkc.org. 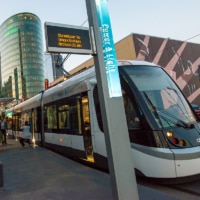