This architectural rendering shows plans for the revamped Rock Island Bridge over the Kansas River. Developers plan to open a public trail, bars, restaurants, coffee shops, and an entertainment venue on the now-closed bridge. Gould Evans.

LaunchKC to be featured in next Keystone Sessions Missouri voters will go the polls Tuesday. Are you ready? 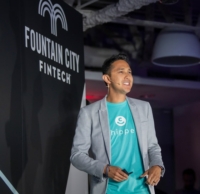