The virtual CMFKC will feature eight performances, including the 9:15 p.m. closer with Calvin Arsenia, voted Kansas City’s Best Musician in 2018 and 2019 by The Pitch. The singer and harpist has built a reputation for turning the arts world on its head. Arsenia’s angelic, classically-trained voice soars over audiences, enchanting even the fussiest of fans, beckoning them to join him as he flirts between genres.

Since its inception in 2005, the Crossroads Music Festival has featured more than 100 bands and attracted thousands of people to the Crossroads Art District. Designed to showcase the best in Kansas City’s music, arts and dance scene, CMFKC provides opportunities for community members of all ages to support its local artists and celebrate Kansas City’s cultural diversity. Click here to learn more about Saturday’s festival AND to make a donation. 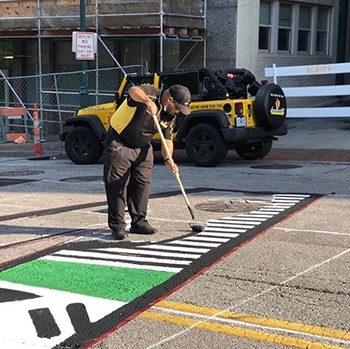 KC Art on the Block considers next chapter of BLM murals

One week after artists and volunteers painted Black Lives Matter murals on six Kansas City streets, the displays are attracting visitors, as well as opening the door to a new series of “vertical” BLM murals. 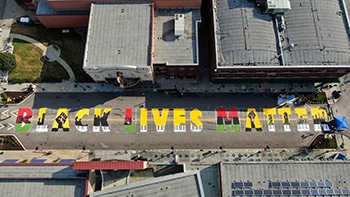 Fundraising continues through the Troost Market Collective, a 501c3 nonprofit organization that is focused on amplifying artists of color. Funds exceeding the street murals’ cost will underwrite a series of permanent, “vertical” Black Lives Matter murals on buildings throughout the city. Design proposals will be solicited from local artists (competition running through Sept. 20) and juried by a committee established by The Urban League. Selections will be announced at this year’s virtual Troostapalooza in October. The Morning Scoop will keep you informed of this effort. 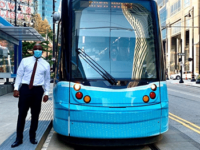