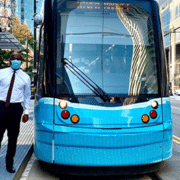 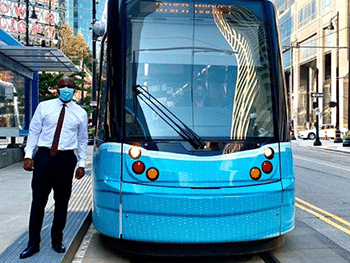 Mayor Lucas takes time out to celebrate with the KC Streetcar!

Score! The KC Streetcar is rolling to the river 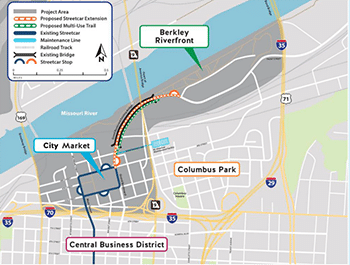 As part of the BUILD Grant program, the FTA is allocating $14.2 million in fiscal year 2020 federal funds to the Riverfront Extension project. This federal funding represents 70 percent of the total project cost, allowing the team to advance design and complete construction for this unprecedented project. The remaining funding for this $22.2 million project is coming from local sources, including $5 million from Port KC. The KC Streetcar Riverfront Extension project team is a collaborative partnership between the Kansas City Area Transportation Authority (grant recipient), the KC Streetcar Authority, Port KC, and the City of Kansas City, Missouri.

“I’m pleased that today Kansas City has secured an additional $14.2 million federal grant – on the heels of a recently awarded $50.8 million grant – to continue our Streetcar expansion efforts,” said Mayor Quinton Lucas. “Since becoming mayor, I have met with administration leaders in Washington and Kansas City to advocate for our community’s transportation and infrastructure priorities, and I appreciate the U.S. Department of Transportation’s continued recognition of Kansas City’s commitment to providing free public options to all of our residents. I thank our Congressional delegation, the KC Streetcar Authority, the KCATA, and our taxpayers for their support to increase mobility and transit options for Kansas Citians.”

This project will extend the existing Downtown streetcar line 0.55 miles to Berkley Riverfront, from 3rd Street and Grand Boulevard to the base of the Grand Avenue Bridge near the Union Berkley Apartments. This extension will not only connect Downtown to the Riverfront but it will afford numerous other benefits in mobility, improved connectivity, and economic development. The Riverfront extension will increase the safety and enhance the livability of residents and visitors and introduce a park-and-ride opportunity to the Riverfront. It will provide convenient access for those commuting from the Northland metro to Downtown.

“The extension of the KC Streetcar to Berkley Riverfront is an important component to building a diverse, mixed-use neighborhood,” said Jon Stephens, president and CEO of Port KC. “One that is centered around citizens, transit-oriented, and with a focus on affordability. This federal grant announcement certainly builds on our momentum and allows for Berkley Riverfront to truly connect to the great neighborhoods in our city. Today is a huge win, and the latest step, for building a riverfront for all of Kansas City.”.

“This is another amazing moment for Kansas City public transit,” said Tom Gerend, executive director of the KC Streetcar Authority. “When added to the recently announced KC Streetcar Main Street extension federal funding, this project will complete the full River/Crown/Plaza transit spine as envisioned by our elected leadership many years ago. This achievement would not be possible without the strong partnership team led by the KCATA, and including Port KC and the City of Kansas City, Missouri. It’s time to get to work on not just one, but two streetcar extensions,” continued Gerend.

“This is a continuation of the exciting transportation projects being supported by Senator Blunt and our congressional delegation that are transforming our region,” said Robbie Makinen, president and CEO of the Kansas City Area Transportation Authority. “KCATA is pleased to be the grant lead for the successful partnership to extend the streetcar to the riverfront.”

“This announcement marks a transformational opportunity for Downtown Kansas City, as we begin the process of extending KC Streetcar services north to Berkley Riverfront,” said Bill Dietrich, president & CEO of the Downtown Council. “We stand in full support of the Streetcar Authority, as work begins soon on seamless streetcar service from the Riverfront through Downtown and on south to UMKC. This is a game-changer for Kansas City.” Rescue mission for Barney Allis Plaza is back on track

Barney Allis Plaza – a centerpiece of the Downtown Convention District – may be down, but it is definitely not out.
City Council members recently passed Ordinance 200225, which revived efforts to move forward with the reconstruction of the Barney Allis Plaza project that occupies the heart of the convention district.
After suspending the effort in May, the City Council voted on Aug. 27 to enter into a design/build process that could result in a new garage and plaza by 2023.
“The garage and plaza are in dire need of updating,” said Ann Holliday DTC vice president, who closely follows the Barney Allis Plaza effort. “We have worked with the City, Urban Land Institute – KC District Council, and other stakeholders since 2018 to develop a plan to bring the plaza area back to life and improve the garage.”
The DTC expresses its appreciation for the support of the Mayor and City Council, as well as the owner’s representative team lead by Bill Crandall, CBC Real Estate Group. Click here to learn more about next steps in the process.
–
September 10, 2020/by Mike Hurd
https://www.downtownkc.org/wp-content/uploads/2020/09/Masked-streetcar-350p.png 263 350 Mike Hurd https://www.downtownkc.org/wp-content/uploads/2017/05/DowntownKC_Logo_REVoutline.png Mike Hurd2020-09-10 17:00:362020-09-10 17:00:36KC Streetcar is rolling to the river + Barney Allis Plaza rescue
Black Lives Matter murals + The Dish + light up in red