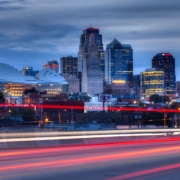 NEWS ALERT – March 11, 2020 – The Big 12 Conference announced on on Wednesday, that the men’s and women’s tournament games will go on this week and weekend at Sprint Center and Municipal Auditorium, but fans will not be permitted in the arenas due to coronavirus concerns. To learn more about the basketball tournaments, or activities at any Downtown arts, entertainment or sports venues, go the venue websites that are featured below.

Downtown KC – March 8, 2020 – The return of the Big 12 Men’s and Women’s Basketball Championships will turn up the heat in Downtown KC this week. Roll the highlight reel to see what’s cookin’ in the Big Town … from Monday to Sunday, March 9-15:

Crown Center, 2405 Grand. This week, featuring the LEGO Trolls World Tour beginning Saturday at the LEGOLAND Discovery Center. Whether you’re a pop diva or a rock god, prepare to get Trolls World Tour ready, as this Troll-tastic Adventure continues through April 19.

Folly Theater, 300 W. 12th St. This week, the Harriman-Jewell Series presents pianist Daniil Trifonov in recital at 7:30 p.m. Thursday. The Times (London) calls Trifonov “without question the most astounding pianist of our age.” In 2011, he won the First Prize and Grand Prix at the International Tchaikovsky Competition. Trifonov has since acquired a mountain of awards and has performed with every major orchestra in the world.

Harriman-Jewell Series will present a debut performance of acclaimed pianist Daniil Trifonov this week at the Folly.

Hale Arena, 1701 American Royal Ct.. This week, featuring Cowtown Showdown – THE championship truck and tractor pull – will rock the American Royal Complex from Wednesday through Saturday in the West Bottoms.

Kauffman Center for the Performing Arts, 1601 Broadway. This week, featuring eight breathtaking performances over five nights this week, including:

Knuckleheads, 2715 Rochester. This week, KC’s favorite honky tonk will kick the East Bottoms with 12 rockin’ performances, including The Reverend Peyton’s Big Damn Band with The Flying Buffaloes at 8 p.m. Wednesday; Bluegrass in the Bottoms and 90.1 The Bridge present Galactic at 8 p.m. Friday; Mardi Gras Party with Chubby Carrier & The Bayou Swamp Band at 8:30 p.m. Saturday; and Michaela Anne (& Her Band) at 8:30 p.m. Saturday in the Gospel Lounge.

Men’s and Women’s Big 12 Conference Championship Tournaments are on tap this week at Sprint Center and Municipal Auditorium. This is March Madness, baby!

March Madness – Downtown KC celebrates its claim to being one of the hottest college basketball meccas in the country with five tournaments this month – one for the national NAIA title and four for conference crowns in the Big 12 and MIAA. The action huts its stride this week with…

Bob Weir – one of the Grateful Dead founders – and Wolf Bros will perform this weekend at the Midland.

The Midland, 1228 Main St. This week, five, eclectic nights of big-time entertainment with:

National WWI Museum and Memorial, 2 Memorial Dr. This week, featuring a special exhibition on The Vietnam War. On display through May, this exhibit explores themes of patriotism, duty and citizenship through a remarkable collection of objects from the New York Historical Society.

The Truman, 601 E. Truman Rd. This week, presenting Caamp stops in Downtown KC on its By and By Tour with special guest Bendigo Fletcher at 8 p.m. Sunday.

Union Station, 30 W. Pershing Rd. This week, Genghis Khan – Bringing the Legend to Life – Discover how legends are made in this world-class exhibition that explores the culture, conquests and heritage of the world’s greatest conqueror . . . the man Time Magazine and The Washington Post named “The Most Important Person of the Last Millennium.” Journey back 800 years, to experience the treasures and stories of Genghis Khan’s 13th-century Mongol Empire, the exhibition is showing seven days a week through April 26. Click here to learn more.

LIVE THEATER – This week, featuring 6 performances on 5 stages, including: