The following post appeared in CityScene KC, the second of two reports on a recent visit to Downtown Nashville. The first post will appear in this space beginning July 30.

Editor’s note: In April, the Downtown Council invited CityScene KC to attend an Urban Land Institute Conference in Nashville, Tennessee with a leadership delegation from the Council. They had heard downtown Nashville’s speculative office development market was robust, and wanted to learn the reasons why and determine if there were any lessons for Kansas City.

To that strategic end, we met with a range of local and national developers, city economic development and Chamber of Commerce leadership. The following post was commissioned and sponsored by the Downtown Council based on our visit.

When Amazon launched its national search two years ago for a second North American headquarters location, Nashville was among the 20 finalists.

And while the Music City didn’t make the final cut this year for the 50,000-job HQ2 prize, it won a great runner-up award. Amazon decided to locate a 5,000-employee operations center there.

Nashville was ready for Amazon because of a 25-year effort to make its downtown more appealing to employers by investing in big “civic furniture” endeavors including sports teams, a new convention center and tuned-up honk-tonk live music district.

It also was prepared to seize opportunities like Amazon because it has a steady pipeline of speculative office buildings either under construction or planned to offer employers on a short timeline.

It’s something that Kansas City downtown advocates would like to see here.

Last year, Starbucks gave our downtown a hard look for a 900-employee operations facility but wound up passing because it would take too long to build the office space it required.

When Amazon came calling on Nashville, Cary Mack of San Diego-based Southwest Value Partners already had a plan ready. In November 2015, he had bought the 15-acre site of Lifeway Christian, a big publisher of Bibles and other religious materials.

He demolished the Lifeway complex to make way for what’s called the Nashville Yards mixed-use project on the underdeveloped west side of downtown.

The 17-acre Nashville Yards development site was formerly occupied by a publishing operation. The planned $1.5 billion development will include hotels, apartments, entertainment and a 5,000-employee Amazon operations center.

Anschutz Entertainment Group, the operator of the Sprint Center, is building a four-acre entertainment district and concert venue in Nashville Yards, and more than 1,000 apartments are planned for the development.

On the northeast edge of downtown, another large, mixed-use project called River North is in the works. A Chicago developer has assembled 125 acres along the Cumberland River and is pursuing a plan that includes high-rise office, residential, retail and hotel space.

Mack, who left his home in San Diego to oversee Nashville Yards, is part of the next wave of office developers in Nashville, building on what the local development community began about five years ago.

“There’s something about this city,” Mack said. “People are uniquely friendly. They care and they are jobs focused.

“It’s a blue city in red state. It’s interesting, but they make that work.”

Besides having a metropolitan government with a strong mayor with the power to put deals together, Tennessee is a formidable partner.

The state has no income tax, a big draw for companies, and is willing to roll up its sleeves to help the city economically with job incentives.

The city and state, along with the Tennessee Valley Authority, the region’s power company, and the Nashville Area Chamber of Commerce, work together to recruit businesses, said Jamari Brown, director of the Mayor’s Office of Economic and Community Development.

“When companies come in, they’re our partners on every deal,” he said.

The 17-acre Nashville Yards development got $15 million from the city for infrastructure work, and the state incentives totaled about $90 million for the Amazon jobs.

Nashville Yards is expected to create 14,400 permanent jobs and have a $30 billion economic impact over 30 years.

Long before Southwest Value Partners arrived from the West Coast, Patrick Emery of Hall | Emery was deep into developing his home town, both downtown and in suburban Cool Springs.

Emery said the decision by Bridgestone, an international tire and rubber company based in Nashville, to relocate from the suburbs to a new, 30-story office tower in downtown in 2017 helped persuade additional businesses it was the place to be.

From his downtown office window, Emery has a view of six tower cranes including the one above his latest big project just across the street, the $500 million Fifth and Broadway development.

Fifth and Broadway is located on the site of the former convention center and includes 372,000 square feet of office space, 200,000 square feet of retail, 386 apartments and he new 56,000 square-foot home of he National Museum of African-American Music.

AllianceBernstein, an investment firm relocating to Nashville from New York, already has leased 205,000 square feet. The project was helped by a property tax abatement and an 800-space garage financed by the Metropolitan Development and Housing Agency.

“We have a great story,” Emery said. “There’s no income tax in the state and our incentives are competitive.”

Emery has a formula for financing and building speculative office projects. The key, he said, is to line up the equity investors upfront and then seek a construction loan later in the process.

With absorption rates currently at 1 million square foot per year in downtown Nashville and rents at $36 per square foot plus $9.25 triple net, it’s become easier to persuade equity partners to finance deals.

There’s also a special approach to designing spec buildings. They have to be functional to appeal to investors, and include amenities such as rooftop gardens, fitness clubs and cafeteria space to lure tenants.

Emery also likes to lease buildings from the bottom up, leaving the best upper floors later for higher-rent tenants. The developer also observed that companies are designing their employee space more efficiently.

“It allows the company to absorb higher rent costs because they don’t need as much room,” he said.

Parking for downtown office workers is boosted by a program the Nashville Downtown Partnership that provides 4,000 free spaces on the lots serving the Tennessee Titans stadium just across the river from downtown. Nashville brands itself Music City thanks in part to the crowds that visit its famed downtown honky tonk live music district on Lower Broadway.

The Partnership runs a 28-van shuttle service from those satellite lots to downtown office buildings that costs $40 per month. There’s also a pedestrian bridge that offers an easy connection between the stadium and downtown.

Ralph Schultz, CEO of the Greater Nashville Chamber of Commerce, observed that downtown Nashville has become the “beacon” for his community.

“We need to give them a place, and no question, our revitalized downtown is the beacon.”

Jerry Riffel, chairman of the Downtown Council, said it’s important for his organization to work with the city to invest in the public infrastructure required to leverage financial partnerships with developers want to build office projects here.

“In Kansas City, the 25-year effort to set the civic furniture and make downtown attractive to prospective employers is ready to transition to new employers and new jobs,” Riffel said.

“The downtown leadership now needs to work hard with the city to broaden economic partnerships for parking and transit development, and to promote more creative use of incentives.

“This process is not simple and will require significant education of media, and neighborhood and business leaders.” 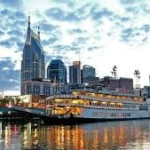 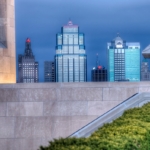