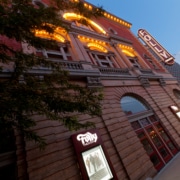 Celebrate the season with a wide and eclectic collection of arts & entertainment ranging from the Kansas City Ballet to the Moth Mainstage; from Bluegrass in the Bottoms to the Kansas City Symphony; to the introduction of a world-class visual art experience at Union Station this week, from Monday to Sunday, May 13-19: Let’s take a peak behind the curtain:

The Midland, 1228 Main – This week, featuring three, eclectic performances to light up Downtown, including:

The Truman, 801 E. Truman Rd. – This week, featuring Elle King and her Shake the Spirit Tour at 8 p.m. Tuesday; and L7 with Le Butcherettes at 8 p.m. Friday.

Union Station will reveal a world-class visual art experience featuring Reflecting Motion, the kinetic sky sculpture by internationally celebrated Patrick Shearn of Poetic Kinetics – this weekend in the Station’s Haverty Family Yards. Following an invitation-onl benefit to introduce the experience on Saturday evening, Reflecting Motion will open to the public on Sunday.

AND, LIVE MUSIC is on tap most nights at these Downtown clubs and joints: Blue Room Jazz Club, Black Dolphin, The Brick, Green Lady Lounge, Hush, The Majestic Jazz Club, Mutual Musicians Foundation, The Phoenix, Prohibition Hall, The Record Bar, The Ship, and throughout the Power & Light District.

LIVE THEATER is thriving on Downtown stages, including six productions this week: