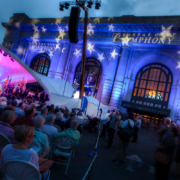 The New York Times has shined its spotlight on seven Midwestern rail depots, including Kansas City’s iconic Union Station. The story, “Grimy, Glorious, Gone. The Divergent Path of 7 Train Stations,” appeared in The Times on Saturday.

The New York Times: “We traveled to seven rail depots in the nation’s middle. The stations, some remade and others crumbling, reflect the trajectories of their towns.” The feature shined a spotlight on depots in Gary, Ind.; Ashtabula, Ohio; Cincinnati; Perry, Ark.; Creston, Iowa; Joplin, Mo.; and, of course, Union Station in Kansas City.

The Union Station portion of the story appears below:

Union Station … Rescued from the Edge

“KANSAS CITY, Mo. — If ever there was a model of a decaying station brought back to vibrancy, it would be in Kansas City.

Singers film music videos in Union Station’s Grand Plaza. Travelers board Amtrak trains bound for Los Angeles or St. Louis. Schoolchildren arrive by the busload to tour its science museum. And the building, the country’s largest train station outside New York when it opened, has been at the center of a renaissance in Kansas City’s formerly barren downtown.

“Just a decade ago, the station was on the verge of bankruptcy and closure. Its renovation in the 1990s, funded by taxpayers in both Kansas and Missouri, was seen as an architectural success, but a financial failure. The nonprofit group that ran the property was millions of dollars in debt and unable to pay its utility bills.

“‘It was the single best economic development tool in the history of Kansas City and the worst business model on the face of the earth,’  said George Guastello, the chief executive who brought in new tenants and saved Union Station from closing.”

Guastello responded to the article by writing, “Thanks to the visionary leadership and support from so many in Kansas City, our Union Station was saved and remade into what is today, an internationally-recognized and awarded masterpiece focused on Science Education, Preservation of History and Celebration of Community. Even better, we’ve only just begun to realize our full potential. ”

To read more about the other six train stations, check out Grimy, Glorious, Gone. in The New York Times.