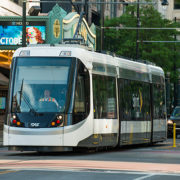 Downtown not only celebrated the first birthday of the KC Streetcar yesterday but also some major league milestones for performance and economic impact.

Saturday’s party celebrating the first year of operation for the KC Streetcar took on even more prominence with confirmation that a staggering 2 million rides have been reached and the economic development underway in the area has soared past $2 billion.

Mayor Sly James and City Manager Troy Schulte led a host of supporters who gathered at Union Station to recognize the positive impact KC Streetcar is making in Downtown, the City communications team reported this weekend.

“We’ve said from the start that the streetcar was about more than just transit,’’ Schulte said. “Fixed rail generates economic development, and combined with the city’s investment in smart city technology, we are building a tax base that will benefit residents citywide both now and in the future.”

Kansas City has more than two billion dollars in economic development underway within the boundaries of the KC Streetcar TDD, or Transportation Development District. As of May 2017, this includes more than $2.1 billion in development projects completed, in progress or publicly announced since voters approved the streetcar in December 2012.

The Downtown Council continues to work closely with the City and the Streetcar Authority to track and report the economic impact of the streetcar.

The streetcar has been immensely popular with Downtown business owners, as well as local patrons and tourists who routinely praise the clean, smooth rides and the free Wi-Fi. Original forecasts of 2,700 for average daily rides were blown away by an actual average of 5,500 over the past 12 months.

Planners predicted Kansas City’s system would reach 1 million rides by its first anniversary. However, that mark was reached in October. Ridership naturally dipped in December and January, but April was the third busiest month behind July and August of last year.

A few noteworthy achievements so far include:

“Today we hit an amazing milestone, our 2 millionth trip in our first year of service, making the KC Streetcar system one of the most productive streetcar systems in the entire county,” said Tom Gerend, executive director of the KC Streetcar Authority.  “Even more important than the strong ridership, the system is fueling an economic renaissance in downtown and that is incredibly exciting for all of Kansas City.”