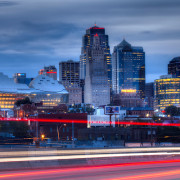 It’s not just the salary or job security that makes a city preferable in a job search. Often, such things as housing affordability and job satisfaction are just as important. And, that conclusion – we learned this week – bodes well for Kansas City.

Online career community Glassdoor released a report on Tuesday – 25 Best Cities for Jobs – which not only names the top 25 cities, but also the basis for what it believes are the three key factors in a city’s appeal for job seekers: how easy it is to get a job, cost of living, and job satisfaction. It then created a job score determined by each city’s median pay for employees, median home value, job satisfaction rating, number of current job openings and population. Note that this report was based on a comparison of the 50 most populated U.S. metros, not every single city.

According to the Glassdoor study, KC is among the very best U.S. cities for finding a job.

Glassdoor determined the final rankings by looking at hiring opportunity — the ratio of openings to the city’s population — the cost of living and job satisfaction. Job satisfaction ratings were drawn from Glassdoor employer reviews during the last year, which includes a satisfaction scale of 1-5. Kansas City’s job satisfaction was a 3.2 rating.

Kansas City was topped only by No. 1 Raleigh, N.C., and followed by No. 3 Oklahoma City.

These 25 cities stand out for having the highest Glassdoor Job Score*, determined by weighting three factors equally: how easy it is to get a job (hiring opportunity), how affordable it is to live there (cost of living), and how satisfied employees are working there (job satisfaction).

As part of this report, we include each city’s median pay for employees, median home value, job satisfaction rating, number of current job openings and population. Check out the results below:

For the complete report, check out the Glassdoor study.

13 reasons to apply for a LaunchKC grant
Scroll to top