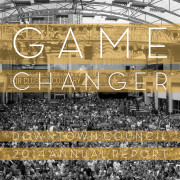 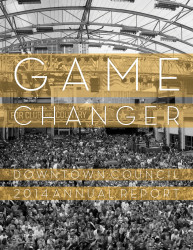 The Downtown Council released its 2014 Annual Report at its to a record audience of more than 1,000 guests at our Annual Luncheon on Friday, Jan. 9. Click here to download the report…or check out this excerpt:

Letter from the Chairman and President (page 6)

Game-changer. There is really no other way to describe what is happening in the streets of Downtown Kansas City right now.

Game-changer is a way to describe the energy and vitality on the streets and in the apartments, restaurants, businesses, theaters and museums throughout Downtown. But it’s more than emotional electricity. This game-changer is about blood, sweat and tears; vision, investment and opportunity. It’s about the coming of the Downtown Streetcar – and how it has emerged as the organizing principle for Downtown.

Due to be operational within one year, the streetcar is not only proving to be a catalyst for economic development and population growth today, but also is paving the way for longer-term developments – game-changers – in the new urbanity of Downtown KC. This is where innovation intersects with opportunity.

By this time next year, the two-mile pedestrian accelerator will be shuttling Kansas City residents, workers and visitors from Union Station to the River Market and back again. Through the neighborhoods of Downtown. Through the restaurants, shops, galleries, theaters, employers, homes and greenspaces of Downtown. And, through the remarkable examples of economic development that have begun to appear along the streetcar route and the many blocks that surround and embrace it.

The Streetcar represents a transformational opportunity for Downtown KC. It’s not only a long overdue step into modern transit but it is – most clearly – a catalyst for growth and density of businesses, jobs, residents, visitors and investors.

How clearly? Downtown Council research supports the reality that the streetcar is already producing investment and change along and around the streetcar route:

• $1.24 billion in commercial, cultural and residential developments throughout Downtown, including $561 million within a two-minute walk of the streetcar line. They are expected to result in:

• Plans, dreams and vision for cultural amenities including the UMKC Conservatory’s Downtown Campus for the Arts; expansion of the Crossroads Academy charter school; expansion and complete makeover of Washington Square Park; and an all-new Downtown YMCA.

And, did we mention that the streetcar is still another year from becoming operational?

Today, more than ever, we need your vision and your elbow grease as we prepare for the launch of the Downtown Streetcar and for our continuing quest to build a healthier, stronger, denser urban community. We are counting on your leadership for Downtown. Much work remains to be done and we need the best and brightest to help get the job done right.

Michael Hagedorn
2014 Chairman, Board of Directors 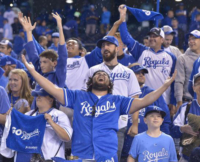