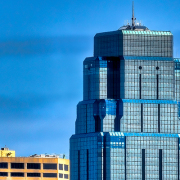 The new majority owners of Downtown Kansas City’s tallest office tower, One Kansas City Place, are finalizing plans for a makeover while also making progress on filling the 42-story structure with tenants, according to The Kansas City Business Journal.

“Timothy Walsh, COO of Los Angeles-based Gaw Capital Partners USA LLC, said that within the next two weeks, he expects to announce two new tenants that will relocate to about 20,000 square feet in One Kansas City Place from locations in Overland Park and the Country Club Plaza.

The transaction involved the purchase of an $86.7 million note secured by the building from Lehman Brothers Holdings Inc. for an undisclosed price. In conjunction with that deal, Gaw Capital USA also announced that it had engaged Jones Lang LaSalle as the exclusive leasing agency for One Kansas City Place.

“The first three months or so after we took over were slow,” Walsh said. “But we’ve been very pleasantly surprised by the amount of traffic (being generated by) our leasing agents at JLL and other leasing agents in the greater Kansas City area.”

To read the complete story, check out The Business Journal.