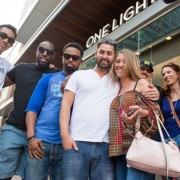 As I scanned the newsstand at Cosentino’s Downtown Market over lunch today, I flipped open The New York Times to catch the latest Dining feature. I scoffed as I landed on a piece on New York’s evolving barbecue scene.

Little did I know that just a few pages separated me from the jewel  of the day. It was much-anticipated feature on one of the nation’s hottest scenes to live, work and play… Downtown Kansas City.

Reporter Joe Gose filed this story today for The Times:

On one of the hottest days of the year in mid-July, Michael Knight, a real estate developer, made note of the torn-up street outside Commerce Tower, which opened in 1965 as this region’s first structure with a glass curtain wall.

Workers were preparing the road for Kansas City’s $100 million streetcar starter line, which will begin running in 2015. It will include a stop right outside the 30-story office building, and the streetcar is one reason among many that the Commerce Tower Group, of which Mr. Knight is a partner, acquired the property just 70 days after he walked through it for the first time a year ago.

Commerce Tower, a former bank headquarters, will be a mixed-use vertical city offering residences, shops and restaurants, along with office space. — The New York Times

In October, the company plans to begin converting the 500,000-square-foot tower into a $90 million vertical city of residential and office space, and retailing and restaurants. The renovation will also include a Park University satellite location, which already operates in the building, and an early childhood school, among other amenities like a fitness center and a rooftop gathering spot.

“The best plan really doesn’t matter if timing isn’t on your side, and in Kansas City, the timing couldn’t be better,” Mr. Knight said. “It’s like all the tumblers on a safe door lining up. Click — you’ve got a winner.”

Twenty years ago, that was hardly the prevailing attitude about downtown, which suffered from a yearslong exodus of residents, workers and shoppers to the suburbs. But over the last decade, Kansas City’s urban core has become known as a cool place to live instead of a dreary place to drive immediately away from after eight hours at the office.

The shift has coincided with $5.5 billion in public and private projects, including the Kauffman Center for the Performing Arts, the Sprint Center arena and the Power & Light District entertainment area, which features clubs, restaurants and — possibly the holy grail of all downtown additions — a full-service grocery store.

The number of people living in the central business district has increased about 50 percent, to 20,000, since 2000, according to the Downtown Council of Kansas City. Apartment developers added more than 6,130 units from 2002 through 2012, and occupancy is above 95 percent, according to the Kansas City office of Cassidy Turley, a real estate brokerage firm.

Officials would like to see the current number of downtown residents double.

“We’ve got the infrastructure now to support 40,000 residents, and there’s pent-up demand for housing,” said Sean O’Byrne, vice president for business development at the Downtown Council. “I think the next 10 years are going to be spectacular for downtown because the groundwork has been laid to make development happen.”

The average rental rates for the most desirable units, rated Class A, have increased to more than $1.30 a square foot from $1.24 a square foot 18 months ago, according to Cassidy Turley, and luxury residential developers are seeking rents over $1.60 a square foot. Cassidy Turley also projects that 715 new downtown apartment units will open this year, and as many as 2,700 units are expected over the next two years.

Like other urban centers, downtown Kansas City owes a large share of its residential revitalization to the millennial generation’s penchant for city living. This demographic group, ages 25 to 34, makes up 25 percent of downtown’s population, according to Cassidy Turley.

Employers, however, remain in short supply in the district. The number of workers downtown and in its immediate vicinity dropped to 61,400 in 2011 from 79,200 in 2000, according to the latest data available from the Mid-America Regional Council, a research and planning organization.

That is acutely evident in office vacancy rates, which average 23 percent for the district, according to commercial real estate brokers. Yet observers are quick to point out that much of the empty stock is obsolete and that apartment conversions are taking a lot of that space off the market.

The office market has been gravitating toward competing submarkets like the Country Club Plaza district and Johnson County in Kansas at the expense of downtown, Mr. Kerr said. “But I think that trend is coming to an end,” he added.

In April, for example, the start-up web-hosting company MindMixer announced that it was moving its headquarters from Omaha to downtown’s Crossroads Arts District, with a planned increase in staff to 150 from 50. The Crossroads district features art studios, restaurants and other businesses in old warehouses, offices and storefronts.

Bob Berkebile, an architect and partner in the Commerce Tower Group, observed that office users left downtown en masse years ago, but only after residents and services moved out. Now the pattern is reversing: Employers are following workers and services back into the core, he explained.

In addition to the Commerce Tower conversion, apartment projects under construction include One Light, a $79 million 25-story luxury tower being developed by Cordish Companies of Baltimore, a major landlord in the Power & Light District. It represents the first high-rise residential development downtown in nearly 40 years, and its 315 units are expected to command rents upward of $1.80 a square foot.

A few blocks up the street, NorthPoint Development of Riverside, Mo., is pursuing a $63 million redevelopment of the Art Deco Power & Light Building, an 81-year-old limestone office tower that outlived its usefulness years ago.

The company plans to put 275 units in the 34-story building, 60 of which will be housed in an expansion. It anticipates a rental rate of about $1.65 a square foot, said Mark Pomerenke, vice president for operations at NorthPoint.

“We set our sights on downtown a year ago,” he said. “The apartment market is very strong, but there’s not a lot of Class A product that will support a full amenity package.”

New construction also is planned on the north end of downtown near the Missouri River and adjacent to a park and activity trail where the Port Authority of Kansas City has set aside 55 acres for commercial development. In June, Flaherty & Collins Properties of Indianapolis began negotiations for a long-term ground lease with the Port Authority of Kansas City to build a $63 million project of 389 apartments and 12,000 square feet of retailing on five acres.

The Port Authority designed a mixed-use master plan for the tract after leading a decade-long, $17 million environmental cleanup.

“From our standpoint, it’s a no-brainer,” said Ryan D. Cronk, vice president of development with Flaherty & Collins. “You’ve got a big piece of property sitting on the river with access to trails and green space, which you don’t get a lot of elsewhere in downtown.”