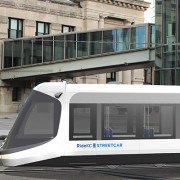 All eyes will be on the Downtown Streetcar route this week, as Mayor Sly James prepares to preside over the streetcar groundbreaking ceremony at 10 a.m. Thursday at the southwest corner Truman Road and Main Street.

While Thursday’s event is poised mark the celebratory beginning of streetcar construction on the two-mile route from Union Station to the River Market, it will also signal a heightened sense of opportunities for real estate and business development  in Downtown.

The Downtown streetcar route is blossoming into the region’s hottest economic development district. Since the 2012 election that launched the Downtown Streetcar line, nearly $1 billion in new development has come into view — either completed, under construction or planned in the Transportation Development District that surrounds the streetcar route.

And, as the City prepares for Thursday’s groundbreaking, the streetcar route — scheduled to go live in late 2015 — is gaining even more momentum.

To assist developers in the assessment of opportunities along or near the streetcar route, the City of Kansas City, Missouri — along with the Downtown Council, the KC Streetcar Constructors and the Economic Development Corporation — have collaborated on a new report, the Downtown Streetcar Development & Investment Guide.

“The streetcar serves as a catalyst for economic development and aims to support a livable, walkable and economically and environmentally sustainable downtown,” according to the report. “Creating a strong physical connection between the streetcar neighborhoods sets the stage for a strong downtown community through supporting existing and new business, improving livability and expanding the cultural environment.”

To read more, simply download a pdf of the report.

To join in the festivities on Thursday, make plans now to join Mayor James, other elected officials, civic leaders and the KC Streetcar Constructors team as they break ground and launch the official first phase of streetcar construction. The groundbreaking is set for 10 a.m. Thursday. It is free and open to the public.

For more information about the groundbreaking event and/or streetcar construction activity, visit theproject website or contact Meghan Jansen at 816-804-8882 or info@kcstreetcar.org.