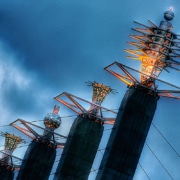 The arts and cultural fabric of Downtown Kansas City will be the focus of the Downtown Council’s Annual Luncheon on Friday, Dec. 10 in the Grand Ballroom of the Kansas City Convention Center.

Bill Dietrich, President of the Downtown Council, today announced the names of those Urban Heroes who will be honored next month. These awards recognize small businesses and individuals who are passionate about the arts and in making Downtown Kansas City a more vibrant place to live, work and play. The honorees are people and organizations that have improved the quality of life Downtown or made a positive difference in its arts and cultural communities.

“The Downtown Council is proud to honor 10 Urban Heroes whose work and lives represent how Art Works Downtown,” Dietrich said. The honorees include:

The Urban Heroes will be honored at a reception on Thursday evening, Dec. 9, as well as at the Annual Luncheon on Friday, Dec. 10

“Downtown Kansas City is a celebration of the arts and culture, featuring more art galleries and studios, performing arts stages, theaters and museums than anywhere else in the region,” Dietrich said. “And, with the opening of the Kauffman Center for the Performing Arts next fall, our sights are set on global appreciation of the arts in Kansas City.”

“Art Works,” Landesman says of his two-word, guiding principle at the National Endowment for the Arts. “It transforms us. It tells the world what is special about us. It is integral to the economic vitality of our community.”

The Annual Luncheon will run from 11:00 a.m. to 1:30 p.m. on Friday, Dec. 10. A limited number of tickets are still available.  Tickets are also available for the Urban Hero Awards Reception, Thursday, December 9, 5-7 p.m. at Webster House, 1644 Wyandotte. Contact Ann Holliday, ann@downtownkc.org or go here to order tickets for both events.